Among Yucatan wildlife are many endangered animals and plants, listed in various categories of the IUCN Red List of endangered species.

Biodiversity on the Yucatan Peninsula is among the highest on earth.

The region houses several important ecosystems which are crucial to the survival of many different species. The Mesoamerican Barrier Reef System is only one of them.

Three different species of mangle or mangrove offer breeding and nesting grounds for fish, crustacians, birds and mammals. There are wetlands, petenes, wet forests and dry forests, all with their own typical flora and fauna.

The peninsula is a birdwatcher's paradise with both migratory and non-migratory species. About 26,000 Caribbean Flamingos inhabit the northern coast of the Yucatan, from Celestun on the Gulf Coast to Rio Lagartos in the Northeast.

The Ocellated Turkey is endemic to the peninsula, Guatemala and Belize. It's a metallic blue-green chicken-like bird, listed as near-threatened but nevertheless hunted. You may also observe the keelbilled toucan, a small parrot called loro yucateco, hummingbirds, pelicans, ospreys, vultures, a crow-like dark metallic blue bird called Yucatan Jay or Ch'el, and many, many others.

The rare and threatened dry forest on the Gulf Coast is home to one of only two species of venomous lizards, the black beaded lizard or Heloderma horridum. The name actually means "horrible studded lizard". This small dry forest area is also an excellent habitat for snakes, vipers and tree-frogs.

Believe it or not, some endangered animals can even be found in your hotel garden. I know for a fact that the Iberostar Tucan houses a group of Spider Monkeys that were already living there when construction began. They've adapted more or less to the presence of tourism, but you're not supposed to feed them. Some groups of yucatan spider monkeys , considered a subspecies of Ateles Geoffroyi, are found in the wild.

Of all the mammals in the region about 50 % are bats and another 25 % rodents like opossum and white-nosed coatimundi. Coatis are funny animals with a long white-colored nose and a long striped tail. On the Mayan Riviera you have every chance of encountering them in you hotel garden. Still, they are listed as conservation dependant.

People always wonder about a rodent called agouti or guaqueque in Spanish. Agoutis are like a crossing between a hare and a marmot. They are cute animals, reddish-brown in color with long hind-legs and a very short tail.

Forest edges and open spaces are favored by white-tailed deer (venado de cola blanca) and brocket deer. The white-tail is a medium-size deer, greyish-brown in color with white underbelly, undertail and snout. They are hunted for the meat by locals.

Jaguars and other wild cats (ocelot, jaguarundi) are extremely hard to observe because of their nocturnal habits. The jaguar is the largest cat of the Americas, and they are among the endangered animals, listed as near-threatened because of illegal hunting and the loss of their habitat. A number of them inhabit the core of Calakmul biosphere reserve on the Yucatan-Guatemalan border, but they can also be found at Si'an K'aan. 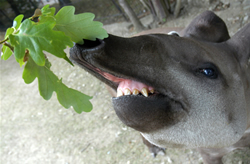 The Central American Tapir belongs to the largest mammals in the Yucatan. Older collegues of mine told me the used to see them frequently in Coba, a long time ago when there were only a few visitors to the temples. Now there are just too many people around.

All sea-turtes are considered endangered animals. The Caribbean beaches of the Yucatan Peninsula are nesting places for the Green Sea Turtle, Hawksbill Turtle and Loggerhead Sea Turtle. The Xcacel inlet at Akumal is considered one of the last undisturbed beaches for sea turtle arrivals. ' Ahk' in Maya happens to signify 'turtle'.

Nesting female sea turtles are easily distracted. If by any chance you encounter one you should keep your distance. Do not touch or disturb them in any way. Never use your flash to photograph them nor use a torch or flashlight. We have to respect these beautiful creatures of the ocean and guard their safekeeping. If we do not protect their environment, they could easily go from the endangered animals category to extinct, like others already have.

At Si'an K'aan biosphere you can observe many bird species, dolphins and the Manatee or sea cow. The Manatee looks a bit like an oversized seal with a paddle-like tail.

Greyish in color, they move slowly and graze the bottom for sea-grass. They used to abound on the shores of the Peninsula. Now they are practically gone.

From June to September each year, groups of whalesharks gather in the area between Holbox and Contoy Island. On the IUCN-list of endangered animals they are considered as vulnerable. Trust me, observing these largest fish of the oceans in their natural environment is a unique and awe-inspiring experience. Don't miss it!