The term Yucatan is possibly derived from the nahuatl (Aztec) language, which is still widely spoken in and around Mexico City. It means 'place of richness' or 'place of abundance', and not 'We cannot understand you', as tourists are told.

In one of his letters to the Spanish court Cortes tried to ridiculize his antagonist Diego Velazques by saying he was the one that initially interpreted yu-ca-tan as "we do not understand you".

It's a funny story but there is no ethymological proof whatsoever for the assumption.

The Aztecs actually hit the nail on the head, allthough the Spaniards initially may have thought otherwise. Since El Dorado clearly wasn't in the vecinity, they moved on. But the peninsula is rich on many levels: an amazing historical past that includes an important World heritage of Mayan culture, thriving indiginous communities who have survived colonialism and keep alive their forefathers language and traditions, a fascinating geology, abundant wildlife with many endemic species, and... yummi culinary specialties!

On a political level the peninsula is part of the Mexican Federal Republic and composed of three states: Yucatan, Campeche and Quintana Roo. Each state has its governor who is chosen for a six-year term and a chamber of deputies. Along with Mexico's national hymn every state also has its own anthem. School children have to sing both on Mondays before classes begin. 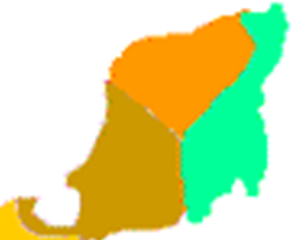 The borders between the three are Y-shaped. The top part is the state of Yucatan, known for its elegant and lively capital, Merida, founded on the ruins of T'ho in 1542 by Francisco de Montejo. The state boasts over 300 haciendas reminiscent of great prosperity when rope made of Sisal was an important export crop. Late-classic Maya baroque-style temples at Uxmal, Kabah and Sayil show the high artistic level reached by the Pre-Columbian natives. Then there is, of course, tourist attraction no. 1: Chichen Itza, recently labeled as one of the new seven Wonders of the World. At short distance from Merida, Progreso harbor is a point-of-entry to the peninsula for both freight- and cruiseliners.

The State of Campeche was proclaimed in 1857. It is one of the Mexican Gulf States, bordered to the south by the state of Tabasco, to the east by Quintana Roo and in the north by Yucatan. The town of Campeche used to be the victim of frequent pirate attacks during the 17th and 18th centuries. To defend themselves the inhabitants obtained permission from the king to build city walls.

The old town within the walls is now listed by Unesco as World Heritage, as is the site of Calakmul, one of the largest Maya ceremonial centers during the Classic era. Calakmul is also the second largest biosphere in Mexico with exotic plant and animal life.

Quintana Roo is the oriental part of the peninsula. This state has been subject to rapid development since 1970 and is now a major tourist destination, where Cancun and the Mayan Riviera fiercly compete for market share while further south the Costa Maya is beginning to open up. Tulumis the second most visited arqueological site on the Yucatan peninsula with over 1 million visitors per year. Tourists from all over the world show growing interest in other sites like Coba, Chacchoben or Kohunlich.

Coba has become an important attraction since it involves a shorter bus-ride than Chichen Itza when coming from the Riviera. In addition the main temple - the highest in the region, can still be climbed while the one at Chichen is already closed to the public. Cozumel is a famous cruise destination while Mahahual on the Costa Maya is being developed for the same purpose. 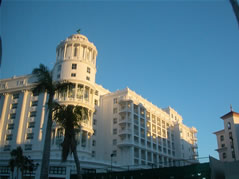 The Caribbean coast of the Yucatan peninsula is famous for its pristine beaches and turqoise surf, attracting millions of tourists each year. The coastline is divided into three marketing concepts, from north to south:

The city of Cancun has become a major tourist destination and stimulated development of the whole coastal area to the south. In less than 25 years what is now called the Riviera Maya, running roughly from the Airport to Tulum, has already surpassed Cancun in numbers (30,000 rooms). Further south following route 307 you'll arrive at the Costa Maya where most development is concentrated around Mahahual and its cruiselinere facilities which were heavily damaged by hurricane Dean in 2006.