My Site Build It Adventure

A story of Piracy and Perseverance

Life was all but easy on the Yucatan Peninsula. With Site Build It! as a blueprint for their cities, the ancient Maya no doubt would have attracted lots of traffic from all over the world long before the Spaniards arrived. Instead, they were practically thrown into oblivion.


After the Conquest, the people on the Yucatan coast were constantly haunted by attacks from pirates, buccaneers and filibusters. Initially these sea-robbers began by attacking only Spanish vessels returning from Europe with all the richess of the New World. But they soon turned their attention to the harbors, too. In Campeche, dozens of vessels often lay anchored awaiting to replenish their stores or avoiding an upcoming storm.

On more than one occasion some pirate overtook the town center on a raping and killing spree. Eventually, after 160 years of putting up with these marine cowboys the inhabitants of the town of Campeche got so tired that they asked the Crown for permission to build a defensive wall around the city. An Armada was set up,and gradually in the 1800's piracy ceased to be a major concern. Until now of course. In our days Mexico is reknown for the modern version of piracy.

I suppose there's nothing romantic about illegally copying music or software, but back then pirate life was adventurous, full of death-defying experiences, at least that's what we like to believe, isn't it?

Let's be honest. These famous pirates like Francis Drake and Blackbeard, they were likely no more than brutal murderers, rapists and outlaws.

So why are we so fascinated by them?

The Site Build It! Naval Acadamy 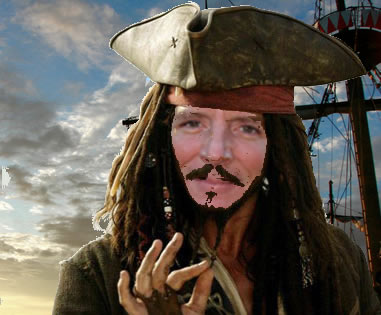 Let me present my vessel: it's called Site Build It. Actually that's wrong, because we're a whole fleet of independent online entrepreneurs. My vessel is my website, the one you're on right now, and I'm building it with SBI (Site Build It)!

Our Admiral is Ken Evoy, who sees to it that each vessel has the absolute best tools available on the internet. He steers the fleet with his gentle but firm hand, though each of us is the Commander of his or her own ship.

Perils lure everywhere underway: treacherous undercurrents of procrastination, cliffs of writers-block, oh, and the so called 'hump' is the most dangerous of them all.

That's why Ken designed the Action Guide, a step-by-step guide for all us sailors. We have a specially designed navigation system that outruns every compas in the internet ocean, called Search It! When a graduate from our Naval Acadamy hits the waters he (or she) will be totally prepared for battle. And he'll win. Admiral Ken really wants to makes sure everyone reaches his or her Secret Cove. As for him, he could have since long retired to his Treasure Island (Anguilla) to enjoy his books and art collection. But no, he's the one that works the hardest of us all! 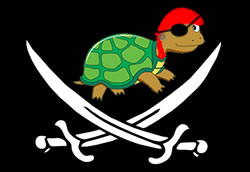 The symbol Ken chose for our flag is the Tortoise. It stands for purpose, perseverance, commitment and integrity. Whenever I see Shelley the Tortoise it makes me feel proud to be on board.

And now, I invite you to meet some of our prominent Naval Commanders and their Site Build It vessels. Some of them have even build their own mini-fleet!

I Bid you Fare Well!