One of the most interesting facts about manatees is that they are genetically related to the elephant and not, as you might expect, to other marine species like seals.

These gentle marine mammals live in shallow coastal waters, rivers and estuaries. They are also known as sea cows because they browse on water plants. In fact they are the only herbivorous sea mammal. 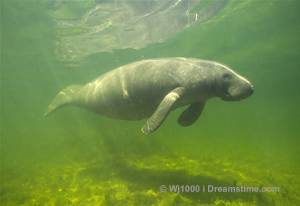 There are three species of manatee:

Together with the smaller oriental Dugong they belong to the order of Sirenia.

Other interesting facts about manatees: 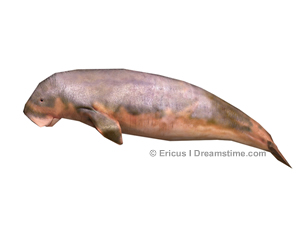 Reproduction is slow, with one calf born every 3 - 5 years. Females reach sexual maturity at 5 years of age, males at 9. When a female is in estrus, she will mate with several males over a few weeks time. Normally after a one-year gestation period a calf will be born. Calves weigh about 30 kilograms. The mother will nurse the calf from tits located behind the forelimbs.

After about three weeks of breastfeeding the calf is able to digest plants. It stays with the mother for a period of two years. The mother-calf relation is also the only long-term social relationship in manatee life. Because manatees do not have natural enemies they never developed a social system for defense or food supply. They are basically solitary animals.

It is thought the manatee can reach about 50 years of age. Since they have no natural predators, boat collisions are the main cause of death among adult individuals. Investigation has shown that the problem lies in the animals hearing abiltiy and the deformation of sound near the surface. Manatees have difficulty hearing low frequency sounds. They get hit by boats because they do not hear them coming. Florida researcher Edmund Gerstein together with his wife and others have developed a kind of sonar that emits high pitches to warn manatees for oncoming boats.