Birds of a Feather

Some of these flamingo facts are well-known. Others...well, have you ever even stopped to wonder why flamingo birds like to stand on one leg? That's a though one, uh?! 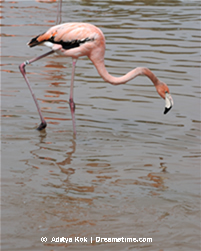 Not all flamingos are pink though. The little ones are born grey or white and turn pink after having eaten loads of small shrimp, crustaceans and algae with high levels of beta carotene. Their favorite dinner on the Yucatan Peninsula is a tiny crustacean called artemia. If you encounter a white adult flamingo in the wild it`s probably sick and/or it has a poor diet.

When I was little and I got the hickups my mother told me (she was right of course) to drink water while holding my head upside down to stop it. Well, flamingos eat like that. They stick their head upside down in the mud and - much like a whale - sieve it through specially developed organs in their bill.

In the '60s, huge concentrations of "phoenicopteris rubber plasticus" were found in lawns across the USA, giving the flamingo a cult-status.

The mud is expelled and the food stays trapped. That makes flamingo birds unique among their species. I guess that also means they never get hickups.

Flamingos are difficult to classify. They are almost like an assembled species: the body of a stork and the webbed feet of a goose adapted for wading in shallow lagoons. Scientists have discovered that on a protein level a flamingo egg is related to the heron. So rather than make this mixture fit into a bird family that wouldn't be altogether justifyable the flamingo was given its own family called phoenicopteridae. Within this family the Caribbean flamingo or greater flamingo found on the Yucatan peninsula is classified as phoenicopterus ruber ruber.

Now back to the question at the beginning: Why oh why do flamingos like to stand on one leg? To give the other one a rest? To conserve body heat and energy? I'll have to owe you the answer to this one, since no-one has come up with a watertight explanation yet.