A swim with whale sharks is one of the most spectacular things to do on the Yucatan Peninsula.

And I had never done it!

After eleven years in Cancun my friends convinced me it was about time I for a whale shark experience. We were a bit late in season, September, but there is always a 95 % chance of finding two or three individuals at least. 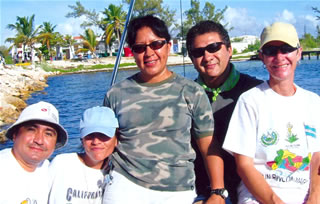 My friend Gerry (the one on the right) made all the arrangements. He was able to get us a nice discount for being tour guides. Those are the moments I really love my job!

We were supposed to be at the Punta Sam marina at 7.30 am. But of course you'll know by now that Mexicans are infamous for being on time. We finally left for the search area at about 8.15. In the boat we were joined by two other couples and Luis, our guide.

Only small groups of maximum ten to twelve people are allowed to swim with shale sharks . There can be no more than two people and one guide in the water with one individual at the same time. Whale sharks are on the IUCN list of endangered animals. They are listed as vulnerable. Because of regulations you also have to wear a bracelet to show you have paid an admission fee for the protected area.

It was a sunny, cloudless day with a calm sea. After a 45 minutes boat ride along Isla Blanca we passed Isla Contoy to arrive at the search area. Whale sharks gather on the northeastern coast of the Yucatan Peninsula, near Isla Holbox and Isla Contoy.

Luis, our guide, gave us some general instructions just in case someone had no experience with snorkelling. Each couple will go into the water with him two or three times, depending on how many whale sharks we will find.

One can't make an appointment with a whale shark of course. Luis had already prepared us to the fact that the search may take a while, anywhere from a couple of minutes up to two hours. Normally though after ten to twenty minutes you may spot the first individual, like we did. Ours was below the surface and disappeared a few times before the captain finally could place the boat in position.

I was the lucky one to go first, with my friend Chucho who is a diver. So he was in his wetsuit. I had to wear a life jacket (obligatory). The three of us sat on the edge of the boat, waiting for the captain's signal. Go!

Once in the water the first thing I did was start looking for Luis and Chucho. I didn't feel very confident. I'm not a fearful person but I didn't really know what to expect. Chucho was signalling me to follow, so I went after him. I noticed the water wasn't as clear as I thought it would be. Duh! The only reason whale sharks gather here is because the sea over here is rich in nutrients, like plancton and krill. So of course the water isn't transparent!

Suddenly I saw this humongous animal coming towards me. I was almost straight in front of it! God it was big. And as I calculated I could easily fit into its' broad mouth. Whoa! 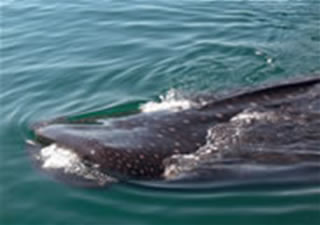 Neither Luis nor Chucho were anywhere in sight. Where were they? Probably on the other side of the animal. Panic struck. The only thing I remember from that moment on is I went blank and started hyperventilating. In a reflex I kicked myself away from the shark, stuck my head out to look for the boat and swam like towards it as fast as I could.

The only thing I could think of was getting out of the water. So ended my very first contact with the largest fish on earth! The whole thing took maybe one minute, tops.

Five minutes later the others climbed back onto the boat. They had followed the animal for several minutes.

Whalesharks are not fast swimmers but a human can only keep up with them for a short time. I gave them my account of what happened (easing a bit on the panic part) and Luis told me not to worry, next time he'll stay on my side and take me by the hand if necessary.

We were not the only group in the area, there were other boats and few whalesharks, so we had to take turns going in. The trick is to position the boat ahead of the animal at some distance, go in and start swimming in the same direction as the animal.

You have to let the animal pass you by rather than go swim at it to get a good angle of observance. Maybe swim a short distance with it. But if you wait too long to go in the shark will be gone already before you even get a glimpse of it.

On my second dive I was more confident. I now knew more or less what to expect. Both my caballeros, Chucho and Luis took me by the hand and did not leave from my side. This time when I saw the shark coming along I shook myself free and started following. As the animal was at about 3 meters below the surface we actually swam right above it for two to three minutes.

My guess is this individual was about six or seven meters long, which in whale shark terms means it's probably an adolescent. There was a yellow tag sticking out from it's dorsal fin, so it was probably part of some monitoring program.

I saw the distinctive pattern of dots and lines on the upper part of the body. Tiny fish were clinging to it.
Awestruck I was, by its' magnificence. What a beautiful creature of the sea and how fortunate I was to have the oportunity to admire it!

On our way back we ate deliciously prepared ceviche and sandwiches, after which a short snorkel time was given near Isla Contoy. I didn't sea any rays or sea turtles but I did manage to spot a lobster.